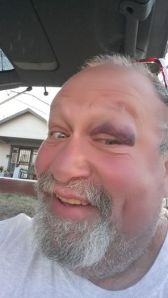 People want the story…  And they appear to want a “juicy” one.  When I posted “the eye” on my facebook page this is what I wrote…

“Curiosity is a very good thing however I can tell you from experience that you need never test the hardness of a bathroom counter in the middle of the night by bending over to pick something up and if you do want to test the hardness, use something besides your eye socket — at Casa Canine”

So I am being encouraged to tell a story.  It has come to my attention that folks did not like or appreciate the eye to counter retelling.  People like stories it seems.. I hope you like this one.

In 1974-1977, I lived in Branson, Mo.  Yes that Branson,  I lived there before it became what it is now it.  All the big Music shows and Family entertainment capital of the world.   They all showed up after I had moved away. I worked for Silver Dollar City.  In the Entertainment troupe, the crafts, the retail.  Honestly I still think of it as the BEST job I every had.  I have friends I worked with then, and they remain employed at SDC.  But as is my tendency, I am wandering, I do that when I remember things.  Particularly when I remember fondly.

The story.  It was probably 1975 or 76.  In addition to my employment, I worked as a volunteer with Young Life of Branson.  A Youth ministry outreach.  And often in my spare time I would meet high school kids on the fields or courts and play ball, and chat, and chew, and spit.  And you know.  On one particular day, several of us were playing what some may call basketball.. for the story it was what I will call it.  And on this special court was a lowered 8′ basket and backboard.  For those not familiar, the standard height is 10″.

An 8 foot basket was created for 2 reasons.  First, so that young boys and girls could throw a ball up and get it in the basket to score.  A lowered basket obviously increases the make ability of a basketball shot.  And of course, the second and most important reason, so short adults like myself can boost the ego by dunking a ball like the tall kids could.  It really works. It is a wonderful idea.  Well, until…….

I have always wanted to dunk at basketball.  When I jump really high I can sometimes slide a slice of thick Texas toast between my feet and the ground.  Not so high now as I have aged, but in 1975, I could catch air.  And this was the day.  I could feel it.  And I had an audience.

Did I mention, this playground had an 8′ basketball goal?  Oh, did I also mention that the backboard was of home made heavy construction, crafted lovingly of 2 x 4 lumber with a goal attached on a flimsy pole?  I really do need to mention this, for what is about to be a very good reason for mentioning.

I had the ball.  The crowd was gathered.  I made my approach, gathering speed, elevating, the ball balanced in one hand above my head, the rim within reach… fly …fly….

And clunk.  The ball in hand, I jam the bottom of the rim… double clunk.  The ball delivered with such fury that I knock the goal off the pole and its comes crashing down, and this 75 pound hunk of lumber ricochets off of my head and shoulders to the ground.  The crowd is frozen in wondrous awe…  I am knocked to the ground.  I am young, strong, I pop up immediately and exclaim, “that could have hurt a smaller man.”  That is the truth.   Those were my words exactly.  The backboard downed, I am without injury.  Not a mark on me.  Not even a scratch.  I exit the playground triumphantly.  I am the victor.  I have beaten the backboard.  I do wish I would have dunked however.

Fast forward to my eye.  A mark has been left.  Permanent, I would think not, but it did cause me to recall and share a story.  It leaves a mark, remembrance leaves a mark.

I read of the glorious remembrances.  Recollections from just folk who raise and elevate their life experiences immersed in recollections that are shared about people and animals who pass from now into forever.