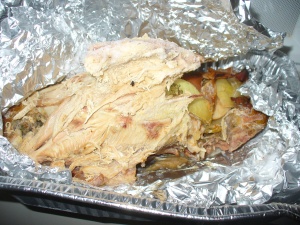 I was a guest in a friend’s home for Thanksgiving this year.  A wonderful event, I was the only non-blood relative among the 17, and I was welcomed like I was born into the clan.  And so I got a family pack of food to go,  plastic containers filled with everything for at least another meal… if not more.  So gracious, so delicious.

And I got to take home the turkey carcass.

Really, my host asked if I would like the carcass.  It was as if my Mom reached down from the heavenly places..”you should take it home, dear.”   So I listened to the voice.  Time for some home made turkey rice soup.

Squeeze everything out of everything.  Mom was that way.  The depression was still a part of her every day existence.  Generous with and to all around her.  She would squeeze value till there was no value.  I didn’t really appreciate the frugal nature of it all.  In fact I am the black sheep of the frugal family.  The Prodigal as it were.  But there is one element of my Mom’s thriftiness for which I will always be thankful, the making of stock and then soup from the leftover turkey carcass.

As an aside, I must mention that mom was not much of a cook.  I mean she could do it.  She just hated to do it.  Swanson tv dinners, Banquet pot pies, and Campbell’s soup can recipes, these were the chef’s at our table.  In the 70’s after she remarried,  the microwave became the most important kitchen tool for this learned woman.  And she was frugal with the use of that kitchen tool, using only enough electricity to get something warm.  No need to waste extra energy to make something hot.  I mention that for the benefit of family who might read this and shake their heads in knowing approval.  But this is about soup. Home Made Turkey soup.

Her second husband.  Tennis and Dancing.  Music and art were my mother’s passions.  My mom traveled the world, over 200 countries.  Seriously, as a private citizen, she was in the upper 1% of world travelers.  She could do most anything she wanted to do.  She could cook.  It just was a waste of her time.  Kitchen travels involved freezer to oven as I grew up, and then to microwave.  As frozen food quality and selection increased, so did her menu choices.

But there were exceptions.  And the holiday meal was one of them.  I mean no meal was complete without canned cranberry jelly and freezer to table rolls and instant potatoes.  But the turkey and dressing and cheesed onions were from scratch, there were no shortcuts.

And then the meal.  And then the follow up.  And that meant boiling and stripping the turkey carcass for what would become, and still is my favorite Mom recipe.

Mom at her Turkey soup best.  With my sister Chrissie.  Get all the meat off of the carcass dear.   “Wow” look at all of that turkey meat.  Ooo la la.”  Mom (Grandma Wow) wasted nothing.  And Turkey Rice soup  was her annual masterpiece.  An homage to waste not want not.  It was glorious. It is glorious.  Did I mention it was a glorious nectar.

So I was wrong when I posted earlier this week that there were no traditions to be followed in the Fulton clan.  When in fact as I write this, I smell the onions, carrots, and celery in the saute, and the sage in the fresh turkey broth.  I feel the bones in my fingers as I scour the boiled carcass for the last scrap of turkey meat to add to the soup.

And then I add it all together with some medium grain white rice, and ladle into the bowl. I spoon out the first taste, slowly it passes my lips,  carefully, knowing that in this bowl resides a small bone or two.  No matter how careful I am to strip the meat, a bone will surely follow.  And I enjoy, and I remember my mother, and I smile, and I cry in a moment of tradition remembered.  This soup contains the best wishbone ever… the wish you were here Mom to enjoy a bowl with me.